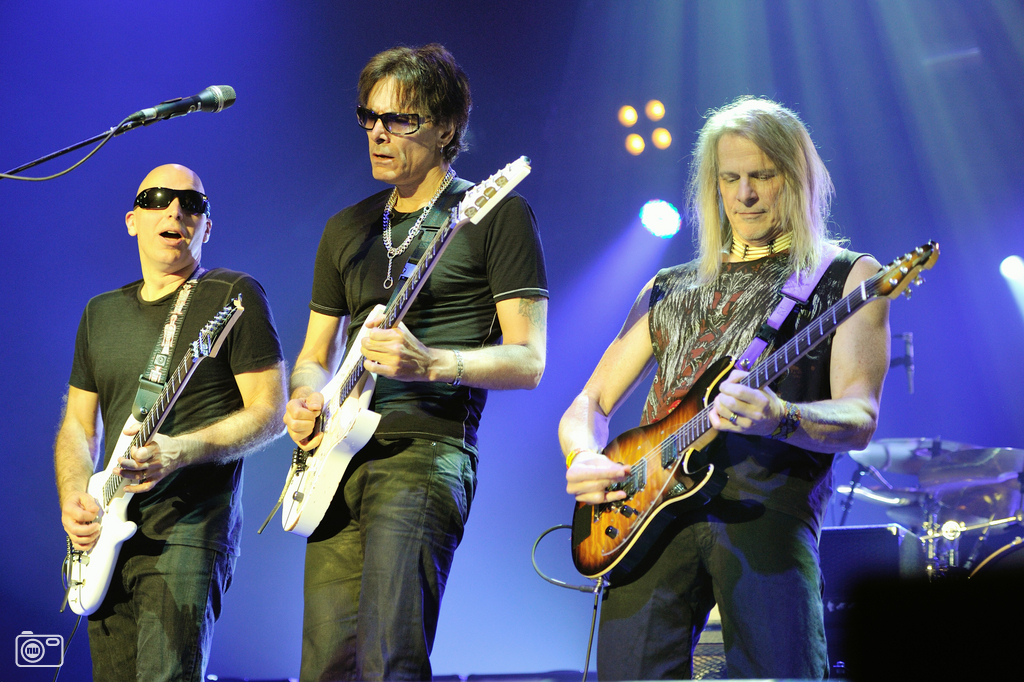 Friday 20th of April, my bro, my pal Paul and I got together to see guitar legends Steve Morse (nope Paul, it’s not inspector Morse), Steve Vai and Joe Satriani play. The concept is simple, all get around 50 mins to do their stuff and then there is a 20 min ‘jam’ with all three of them.

Steve Morse being ‘lowest in hierarchy’ kicked off in what I call a rather boring set. The songs he played must date fom his solo work (Steve Morse band) or earlier bands (Dixie Drags) and were unknown to me. It didn’t make me run to the record store. The riffs are boring, chord changes predictable and always these tempo changes to get some movement in the songs. Had to make some phone calls anyway so left the hall for a while and almost missed his (in my view) the best song of the set, a ‘chickin’ pickin’ kind of tune hat made the audience dance and cheer a little.

Next stop Steve Vai. All lights went out, the band enters the stage except for mr. Vai who makes some recognizable talking/scratching sounds before rushing on stage. That’s what we call an opener. Rushing into ‘The audience is listening’, not my favorite but his control, tone, dedication and enthusiasm makes he audience go wild including me.

The set was too short, Vai playing his well known songs including ‘Building the church’ which didn’t really have the detail as in earlier performances. Liked the fact that the bass player used a Steinberger headless bass for one song.

Last, the ‘organizer’ of the tour, Joe Satriani. He kicked in with ‘Crowd Chant’ changing smoothly into ‘Ice 9’. Didn’t like his sound, it was very aggressive and I couldn’t suppress the idea that Satch didn’t like it as well. His playing was nit very precise I must say. I’ve seen him many times being completely in control, in such a way it became even boring. Now it seemed he had to work for the money, it became more rock-n-roll. Maybe the fact that he didn’t have a second guitar player (something that Steve Morse should absolutely have!) made good old Satch having to work harder.

All well known songs wer played, sadly not ‘Spain’ which is my favorite.

After Satriani’s set, the new amplifiers were pushed on stage to have the ‘jam’. Between quotes of course because every note the gentlemen play seems to be predefined. The jam songs were ‘You really got me’, ‘White room’ and ‘Rockin in a free world’ so I was missing something to commemorate John Lord who tragically died from cancer that week. Would ‘Smoke on the water’ not be a good option, just to say thanks to one of then thriving forces behind hard rock? But maybe hat’s too much improvising. The jam set was utterly boring with standard solo’s, no risks and I couldn’t see any joy in their faces except fro the ‘American’ big smiles. No, they can skip this part.

Maybe  I’m too negative and this is what the majority of the audience likes, but with that much talent on stage… Anyway I had a fun night, though if they were to play next week again I would skip…