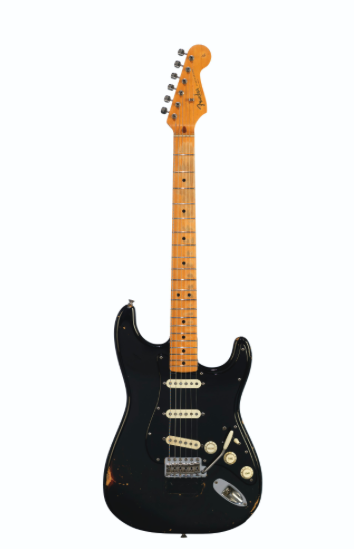 William, my trainer at the gym, is a huge Pink Floyd/Roger Waters fan. Often on Sundays when we train alone, he puts on some Floyd album. So after training for over 3 years with him, I know the complete Floyd repertoire by heart.

Somewhere in sprong 2019 we came to talk about the auction of a collection of David Gilmour’s guitars including his black Strat. William couldn’t believe that someone would put down $150K for a guitar and he completely went mad when I told him that this guitar would easily fetch between 1 and 1.5 million dollar. Of course, I was wrong. Someone bought the guitar for almost $4 Million (excluding the auction fee which would also be around 10% of the purchase amount).

During training, I told him about the signature guitar market. William doesn’t know that much about guitars but he became interested when I told him that you could buy a Gilmour signature Stratocaster for about $4500 in a regular (factory new) version or even in a road-worn “relic” version. But on the other hand, Thomas.de offers a similar guitar for less than $200. And on youtube I found a video of a guy painstakingly making an über exact copy of this guitar. The video has disappeared from Youtube but recently it popped up again.

William checked this guy’s website trying to find out what such a relic would cost, but couldn’t find anything.

“I can make you such an exact replica” I responded boldly and from then on I have been doing some research.

Best way to start is the book that Gilmour’s guitar tech Phil Taylor wrote in 2007 about this guitar called “The Black Strat”. But this book is rare, out-of-print and second hand copies do around $400-$750 on eBay.

More luck I had on the Christie’s website. Super detailed photo’s are available and they give you a good idea what has been done on this guitar over the years. I won’t go into details, there are many sites that give the full history. And I finally managed to find a .pdf of the “The Black Strat” book (in Russian, but Google translate is my friend).

Let’s start with the new. The neck has been replaced multiple times but the neck installed now (the 6th neck) is – according to the book- a neck from a 1983 strat. But looking on the pictures from Sotheby and the book, I see differences in the logo. The Fender logo on the Sotheby pictures is clearly put on afterwards (look like it’s done by a 5-year old kid). The www.gilmourish.com website has some interesting headstock pictures but these pics are from before 2007, the year the book has been published (when was the book – written, how old are the photo’s …). Anyway, looking at the specs of the re-issue we can roughly determine the specs of neck:

The neck has the vintage style truss-rod which you have to adjust at the heel. This means you always have to remove the neck from the body in order to do truss-rod adjustments. I don’t like that because it takes so much more time for adjusting a neck. The neck has the walnut skunk-stripe for filling the truss-rod route on the back like almost all fender necks have – whether it is needed or not.

Another thing, Gilmour is famous for his fantastic string bends, but with a 7.25” fingerboard radius and small (dunlop 6230) frets…. Is that going to work? OK, he is not a shredder so he might use a high action. I can’t find any details so I stick with a fingerboard radius of 7.25” and Dunlop 6230 frets.

The neck is screwed with four bolts to the body with a regular metal neck plate (no plastic in between body and neck plate) which has serial number “38979”. Nicely worn as well.

The body is made of alder – 1968/1969. Originally it had a 3 three-tone sunburst but it was sprayed black later. I guess both the sunburst and later the black paint had a glossy clear coat.

The pick-ups is an issue. The following pick-ups are in the re-issue:

The neck and middle pick-up can only be bought in sets, so I have to find alternative pick-ups.

The pick guard is one-ply black with rounded edges, something I can easily make myself.

We will need some other stuff, strap holders, vintage looking knobs, 5-way switch, jack-input, string tree holder, strings, some screws plus new frets for the cheap version (I will have to reshape the fingerboard to a different radius and put new frets in). Most stuff I have lying around so that won’t cost me anything.

Now it’s waiting till my other projects are finished….I’ll keep you updated!