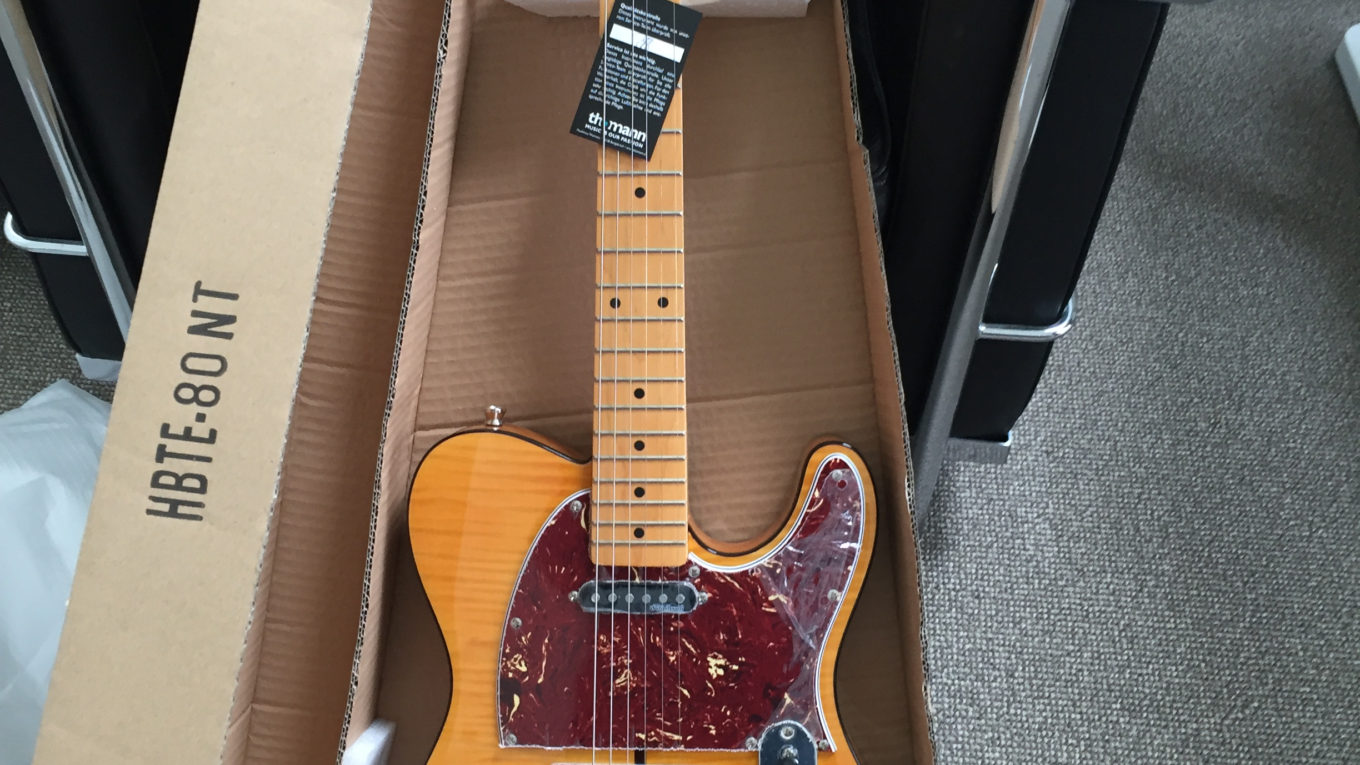 Finally after some contemplating, I decided to purchase the Harley Benton TE-80 guitar which looks as a quite good copy of the Prince telecaster. There are some “unboxing videos” of this guitar on youtube and the reviews are not that bad. So why not take a chance for 190 euros?

Harley Benton is not a very familiar name. In fact it is a brand run by one of the biggest online music stores: Thomann. It’s a German online store so when you are living outside of the EU, their products may become quite expensive because of taxes and shipping costs.
The guitars are probably made in China, maybe Indonesia. That should not be an issue. Some quite nice guitars may come from these countries, of course -especially for that price- it’s never going to match a high-end guitar. But it should be playable and with a few modifications and upgrades

The guitar was delivered within a week after my online purchase and my first impression was quite positive. Let’s look at some points:

Overall, a nice guitar considering it’s price. But there is one drawback (which can be fixed), the frets are not finished well. The fret ends stick out and that hurts  your fingers. A guitar like that would never be able to pass quality control. For me it’s a 15 minute job to fix it, especially when I combine it with a nut replacement and an overall fret levelling. But a guitar in this state should never be shipped to a customer.

Everybody Always wants to know what the pick-ups sound like. They are Wilkinson pick-ups, I am not too excited about them but I am going to replace them anyway.

Sorry Thomann, the guitar in this state is a fail. Maybe it slipped through QC. But with nicely rounded frets I would really recommend this guitar, also for beginners.

First I had to find some good looking pickguard material. I ended up with Boston PG-333-WCY. It’s three ply and the WCY probably stands for “WildCat Yellow” as that was on the back sticker. It is not see-through as the original is. As you can see in the picture below, the original “pickguard” doesn’t fit perfectly around the bridge. The new one will!!! Next step was to make some templates from MDF based on the original pickguard(s) and corrected where it needed to be corrected. After roughly cutting the material and taping it to the template (I love double-stick tape!), it was time to use my homemade table-router:

All went fine. Please keep the protection tape on the pickguard material, it prevents scratches.

I did’t dor any rounding of the edges, otherwise you would see that it is three-ply material. After that drilling the screw holes and finishing them with a rounded bit so the screws will fit perfectly. Now for the headstock. I got a bit bored with the Harley Benton logo so I attempted to remove it with a little bit of sanding. But it turned out that the finishing layer gave the yellow coloring. I had to remove everything from the headstock…. I was able to find a matching logo on the internet. Reworked it in my favorite drawing program Inkscape and printed several logo’s on Avery transparant label paper. A couple of clear coats to stabilize the prints and you’re ready to go. First I sprayed some nitro yellow see-through lacquer. And after drying its time for test-fitting: Sticking the logo on the headstock and then it’s time for quite some layers of clear coat. The end-result after polishing: I also did some fret leveling as the neck was detached from the body. I made a new (bone) nut, replaced the bridge pick-up with a GFS Lil Killer rail pick-up I had lying around which gave the following result (with matching leopard strap):